When you say the word “Legacy” what often comes to mind is something that has been left behind by a person. Vocabulary.com states, “Legacy comes from the Latin verb, legare ‘to appoint by a last will, send as an ambassador’”. For example, they state that it was something handed down from one generation to the next. The thing that is passed down is usually something important to the person who left it. Sometimes it’s money, property, or something else that they might have cared about. According to Meridian Life Design, “legacy is more about sharing what you have learned, not just what you have earned, and bequeathing values over valuables, as material wealth is only a small fraction of your legacy.” 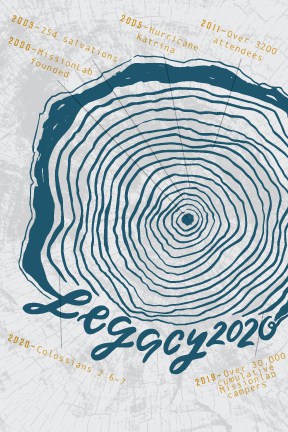 As the MissionLab staff started thinking about 2020, we knew that it was going to be the 20th anniversary of MissionLab. With this, we wanted to honor where we have been but also look to where God is leading. When looking at where MissionLab has come from, we talked with some of those that were involved in the founding of MissionLab and looked at some old MissionLab archives. We found this quote from the first summer, “Our desire from the beginning was to be ministry centered. We want them to understand that God is already doing work here that they can be a part of, but we also want them to see that God is working around them at home, and they need to go home and get plugged into that.” This is still the desire and goal of MissionLab. Our slogan is Learn Missions. Do Missions. Be a Missionary. Our goal is for participants to learn about and how to do missions, come and experience missions here in New Orleans, and then return home and continue to serve.

So with the history and vision of MissionLab in mind, we chose the theme Legacy for 2020. With this theme, we are hoping to encourage participants to think about what kind of legacy they are going to leave behind. As Christians, we are called not to leave a legacy of ourselves or things but to leave a legacy of Christ We are called to live for Christ in all aspects of our lives from school, work, what we watch or talk about, and all aspects of life. We are called to be bold in our faith and share it with others. It’s not just about sharing it with the next generation but with everyone that you meet. As Christians, we are all called to share the good news of the Gospel with those that we come into contact with.

Colossians 2:6-7, states, “Therefore, as you received Christ Jesus the Lord, so walk in him, rooted and built up in him and established in the faith, just as you were taught, abounding in thanksgiving.”. So if you have received Christ Jesus the Lord and are walking in Him, you should be rooted, built up, and established in the faith just as someone taught you. If someone taught you these things then you are also called to pass it on to others. All throughout the Bible, we see where people lived by faith and passed that faith on to others. One of the places that talks about those who lived by faith and left a legacy of faith is in Hebrews 11. We see that Abel, Enoch, Noah, Abraham, Sarah, Isaac, Jacob, Joseph, Moses, Rahab, Gideon, Samson, David, Samuel, and many more all lived by faith. We are told that all of these, “though commended through their faith, did not receive what was promised, since God had provided something better for us.” Hebrews 11: 39-40a. By reading about these believers and many more in the Bible, we know that a life of faith is one that leaves a legacy not pointing to oneself but to Christ and God through Him. This is the ultimate goal of MissionLab. We want to leave a Legacy of faith that points others to Christ through our faith in Him and action in serving Him.

So this year through our blog, devotionals, morning focus, and more while you are here, we hope to point you to a deeper relationship and faith in Christ so that ultimately you can point others in the same way and leave a Legacy of seeking Christ both while you are here in New Orleans and when you return home.

About the Author: Pete Harbin

Pete is the director at Missionlab and was born and raised in Northport, AL. He received his M. Div. in Missions from NOBTS in 2015 and is currently working on his DMin. He enjoys time in the water whether that be swimming in the ocean or going on a boat in the lake.
Page load link
Go to Top