When I ponder the past summer, I am taken back to where it all began; filling out the MLab application to be a summer missionary. It was February 22nd and 22 days after the due date, but I felt the Lord calling me to apply, so I did it anyway.

Flash forward a couple of months, and I had a job in New Orleans (which feels totally weird because being a summer missionary never once felt like a job). I was walking through security at the airport before I actually processed what was happening. I was leaving my home, with only 2 suitcases, for the entire summer to serve with people I didn’t know in a city that I had only been to a handful of times. I was leaving my comfort zone in order to do what I knew God was calling me to do, and through that the Lord was bringing me closer to Him! I’m not gonna lie, I prayed from that moment at TSA until after I got onto the NOBTS campus.

The immediate bond I felt with the rest of the MLAB staff made it apparent to me that I was called to NOLA for more than just a mission experience. The Lord had brought me there to experience a genuine faith community. Having people who you know are seeking the Lord and having His will pour into you is one of the greatest gifts, and some of the best moments of the summer were when I got to spend time with the fellow staffers. Walking alongside them, doing life with them, and seeing the ways we all grew over the summer are things I’ll always remember. Reminiscing, I can honestly say that I have never eaten more chicken wings, laughed more, had less sleep, and drank as much coffee as I did with the incredible staff at MissionLab. Through the community, God put around me and the work God put before me, I learned two major lessons. 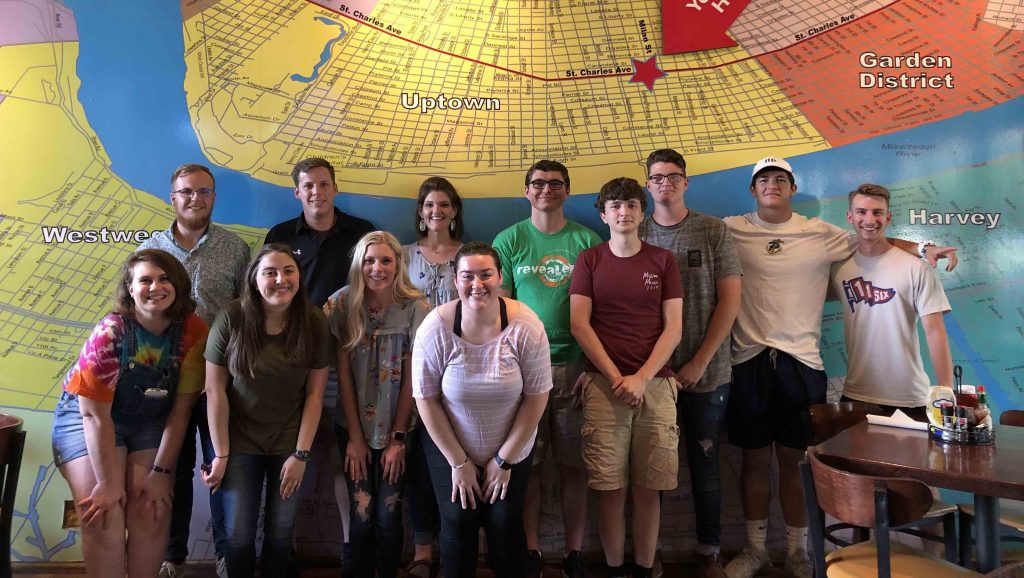 Relying on the Lord More Than Ever

Throughout the summer, with each coming group, I first learned to rely on the Lord more than I ever have, while also learning more about who He is. With the exhaustion of each new day came new mercies from God. On the mornings when I didn’t think I could get out of bed because I was so tired, 2 Corinthians 12:9 was brought to life. All of those days, God moved, regardless of my own exhaustion, in ways that I never could have fathomed. With every group, God gave me a greater passion for His word and the Gospel being shared with the people of NOLA. We weren’t there to simply do the work, exchange small talk with the people, and leave. We were there to deny ourselves and follow the Lord and the great commission to go out and be His witnesses!

Instead of focusing on what God was gonna do this summer, I had spent my time worrying about not doing enough, being enough, or having enough. Even still, God quickly showed me that He equips the called and that through each trial this summer brought, I never would have endured it without Him. There would be so many days that I would get hung up on little things that never mattered rather than focusing on the things of Heaven. He was constantly correcting me and guiding me to examine life through a divine lens, one that magnified His glory.

Works Without Faith is Dead

The second big thing that I have learned this summer is that it doesn’t matter how much you get done working on a house or in a food pantry, how fun your park ministry was, how many homeless packets you hand out, or how many rounds of bingo you play with the elderly. If the Gospel isn’t being shared, you must ask yourself, is this really ministry, or just some great humanitarian effort? Granted, faith without works is dead, but inversely, works without faith is dead.

As much as we would unfortunately like to think so, there is nothing in our power that we can do to save people. The Holy Spirit comes down upon people and saves them. It’s our job merely to share the Gospel, this glorious truth that no man is righteous, not one (Rom. 3:10), but God loved us enough to send His Son, His only Son, not into a high place of worldly honor, but to die a criminal’s death on the cross for our sins. And He did all of this so that we might spend eternity with Him. This summer was just a small glimpse of the freedom found in the unrestrained pursuit of the Lord and His will. In the end, He calls us all to deny ourselves, pick up our cross, and follow Him!

Interested in serving at Missionlab this summer? Find out more information here!

About the Author: Emilee Batson